North Bay, ON – March 29, 2021 – The City of North Bay expects to repave 37 sections of roadways and five sections of pathways as part of its resurfacing program this year.

A total of $3.6 million has been budgeted for the 2021 program, for which a tender was recently issued. This is in addition to patching and work on rural roads which also takes place annually.

The list of roads for rehabilitation as part of the program is developed through a quantitative and objective process that is updated every four to five years by a third party for the City.

Roads are scored and ranked based on traffic usage and other criteria including riding comfort, noise, cracking and stress.

Though the City has traditionally prioritized arterial and collector roads, it has started in recent years to tackle lower-usage residential and rural roads that are considered to be in the poorest condition.

Depending on condition, roads included in the program will undergo various types of treatments, including milling and paving, pulverizing and paving, overlay and reconstruction. Roads requiring major reconstruction, however, are typically addressed as standalone projects and also include other infrastructure improvements.

The tender for the program closes on April 20, 2021. Once a contract has been awarded, work is expected to continue until the end of October. The following list may be subject to change based on the tender bids and costing received. 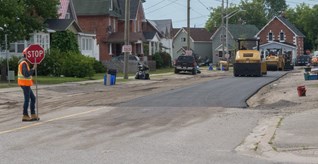