Connecting Local Businesses to the Film and TV Industry

North Bay, ON – Dec. 10, 2021­ ­– Today, the City of North Bay, in partnership with Tourism North Bay and the North Bay & District Chamber of Commerce, announced a new initiative aimed at strengthening the connection between local businesses and the region’s multi-million-dollar film and television industry.

“We’ve been working hard to support the film and television industry over the past number of years because we know the important role that it can play in helping to grow the City’s economy and culture,” said Mayor Al McDonald. “The industry has created local employment opportunities and businesses like hotels, restaurants, gas stations and hardware stores all benefit whenever film productions come to town.”

Both businesses and productions will benefit from the development of a new directory of local goods and services.  From retail and restaurants to specialty items, esthetics and healthcare services, the guide will direct visiting cast and crew members to local businesses interested in serving the industry.  The new listing will also showcase the growing local filming infrastructure services and providers.

“The film production guide is a win-win for our local economy and the film and TV industry,” said Vic Fedeli, MPP of Nipissing. “Our region has seen millions in economic spin off. That is why our government is committed to ensuring that Ontario is open for the film and TV industry to do business by providing investments through the Northern Ontario Heritage Corporation and assistance with their tax credit eligibility.”

The new guide will be launched in early 2022 and made available to productions that plan to begin filming in the area in the spring. Businesses interested in having their products or services included in the guide are invited to register at https://www.tourismnorthbay.com/film-guide/

“Local businesses and the film and television companies that have chosen to come to the region of Nipissing-Timiskaming for their production will be working together,” said Nipissing-Timiskaming MP Anthony Rota. “The film and television industry is a growing sector for our area and partnerships like this are key to maintaining that growth and momentum allowing everyone to prosper.”

Film and television has been a growing industry in the region as demonstrated through an increasing number of productions and investments in supporting infrastructure over the past decade. Although the industry slowed in 2020 due to the Covid-19 pandemic, activity picked back up in North Bay and area this year with a total of 17 productions, resulting in an economic impact of more than $31 million. This includes a total of 207 filming days at 87 different locations.

“Tourism North Bay recognizes the contribution of the film industry to North Bay’s economy, and more specifically, the hospitality industry,” said Steve Dreany, Executive Director of Tourism North Bay. “It is for this reason that we are pleased to partner with the City of North Bay and the Chamber of Commerce to provide this resource to link production companies and film friendly businesses.”

Additionally, as part of the ongoing effort to support local businesses and continue to attract film and television productions, the City of North Bay’s Economic Development Department has released a new video showcasing the variety of local industry supports and growing infrastructure.

“Every dollar spent in the district from this industry is great for the local business community and we are thrilled to be partnering on this initiative,” Peter Chirico, President & CEO of the North Bay & District Chamber of Commerce.

To watch the video, visit: https://www.investinnorthbay.ca/why-north-bay/north-bay-videos/ 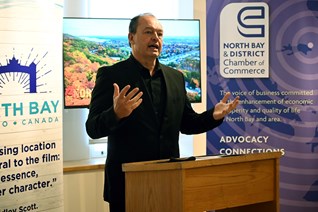