North Bay, ON – May 30, 2022 – The City of North Bay, with support of the Honorary Colonels at 22 Wing/Canadian Forces Base North Bay announced the lineup today for the celebrations planned for Armed Forces Day.

“Armed Forces Day is an opportunity for us to show our appreciation for all of the men and women who are currently serving in the Canadian Armed Forces, as well as those who have served and sacrificed to defend our freedom,” said Mayor Al McDonald. “I would encourage everyone in the community to attend this year’s activities and honour those in uniform serving our country and keeping us safe.”

Armed Forces Day will return this year as an in-person community event on Wednesday, June 22 from 10:30 a.m. until 3 p.m. at the North Bay Waterfront.

School-aged children from local school boards and the public are invited to arrive at 10 a.m. to listen to the 22 Wing Band, watch demonstrations by the CH-147 Chinook, Canadian Forces Snowbirds and the Canadian Armed Forces SkyHawks Parachute team.  Members of the community will also be able to walk through military static displays. All activities and entertainment will be free to the public. Memorial Drive will be closed from 7 a.m. until 4 p.m.

“2022 marks the 10th year the City of North Bay has hosted Armed Forces Day in person,” explained Honorary Colonel Jake Lacourse. “In addition to celebrating the 10th anniversary of Armed Forces Day, we wanted to recognize the importance of working together.  It takes a community to work together to succeed, to achieve, and to grow.”

It is called Armed Forces Day in North Bay to recognize members of the United States Air Force who, as part of NORAD and in support of the mission of the Canadian Air Defence Sector at 22Wing/Canadian Forces Base North Bay, contribute to the successful bi-national organization and have been part of the North Bay community for 70 years. 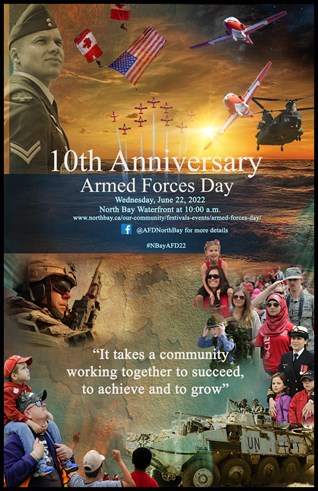