North Bay, ON – May 2, 2022 – North Bay City Council has unanimously approved a motion to rename Marathon Beach in recognition of Nipissing First Nation heritage as an important part of the City’s history.

The beach, which is located on Memorial Drive along the shore of Lake Nipissing will be renamed in honor of Chief Shabogesic, one of the most significant Nipissing First Nation Chiefs, who was signatory to the Robinson-Huron Treaty of 1850.

“Shaabgiizhig Jiigbiik” in Ojibway, the beach will also to be known as “Shabogesic Beach.” In consultation with Nipissing First Nation, a plaque will be constructed at the site to share the history behind the name.

The name Marathon carried over following the City’s purchase in 1984 of the lands from Marathon Realty, the Canadian Pacific Railway’s commercial real estate subsidiary, which it sold in 1996.

He lived at the mouth of the Sturgeon River for the greater part of his life.  One burial ground of his Nbisiing is situated in Springer Township where Shabogesic was resident for most of his life.

In the Handbook of North American Indians, the Nbisiing were recorded to have five dodems. The Blood (Miskwaa’aa), Birch Bark (Wiigwass), Heron (Ashagi), Beaver (Amikwaa) and Squirrel (Atchitamo).  Paul Kane in 1848, reported that Shabogesic’s clan was the ‘bird, possibly heron’ and that his name meant ‘Against the Heaven’.1 Shabogesic is the colonized spelling, and his name appears in many government documents as *Shaabgiizhik, Zhaabgiizhik, Shapisgeshig, Shabogeshick and Cbokijik depending on the language of the interpreter.

Shabogesic and his principal men those men agreeing to the treaty request in the 1848 month of flower letter,2 utilized the deer, elk, moose, fish, and marten to sign this letter.  This letter provides important examples of mid 19th century Nbisiing doodems and affirms the rights of our Nation to identify with their doodems and align their alliances with other Nations doodemag interpretations and teachings.

Chief Shabogesic and his principal men, Penasse and O’Jeek attended treaty negotiations that resulted in the Robinson Huron Treaty of 1850.  Chief Shabogesic signed this treaty on behalf of his People and as the 10th Nation to sign, therein Nipissing Indian Reserve No. 10 was created.  Nipissing people refer to this treaty land base as the NBisiing Shkon’gan.  ‘Shkongan’ literally translates to mean those lands left over from their traditional territory.

Chief Shabogesic employed the usual practice of the Nipissing to utilize familial alliance to control trade at Lake Nipissing.  The colonial trade on Lake Nipissing that emerged in the early 19th century was structured by marriage allegiance to traders.  His only daughter Angelique was the wife of Norman McLeod the Factor of the Hudson Bay Company.  He had familial ties with the trader located at the La Vase and allowed for familial ties with Dokis Nation to occupy Nipissing land at a point called “Abitawe’ (central point) for a time a trading post operated by Michel L’Eagle in the mid 19th century.

He was about 80 years of age when his death was reported in July of 1869.  He was buried in Ktiganing (Garden Village) lakefront burial ground on Nipissing (Reserve) Skongun next to his son in law Norman McLeod, the former factor for the Hudson Bay Company and his daughter Angelique Shabogesic McLeod.

Shabogesic, in the month of flowers (May) of 1848, Chief Shabogesic dictated a letter to the Government House to request that land be set aside for his people.  This letter was written in the Nbissing language and in the French language.  Most Nipissing at that time were tri-language speakers.  In the productions above you see to the left an excerpt of a sketch by Shabogesic of Lake Nipissing.  In this sketch he provides the width and depth of the land he requests numbered #1 in the west, #3 to the north and #2 to the east.  On this sketch he provides ‘X’ marks for where native people are residing.  He also provides by intermittent slash marks on the sketch providing routes on how to travel from what is now called the La Vase River to what is now called French River and the route through Wigwam pass to the west arm of Lake Nipissing. 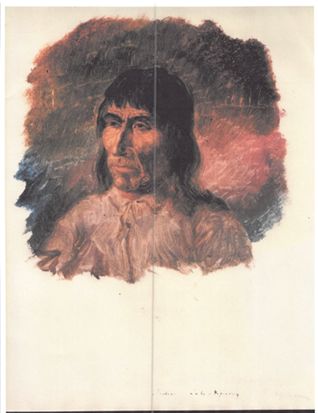